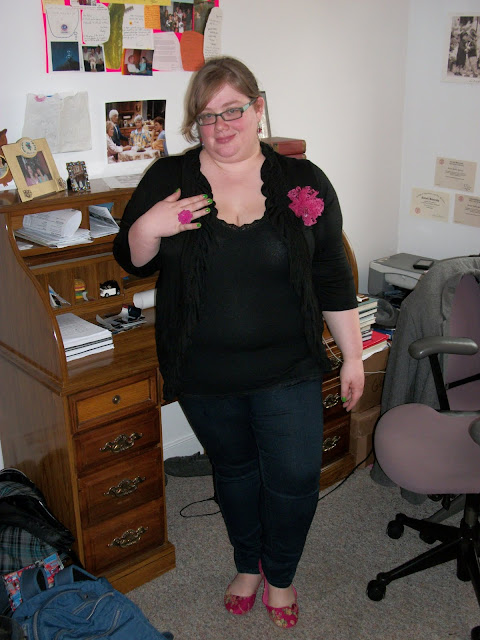 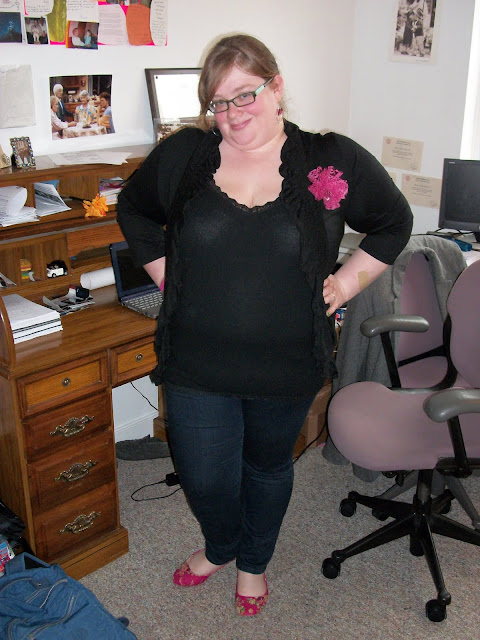 I like this look because it's casual but cute.  The cardi is a nice, soft jersey, which is great in the spring weather.  I am also totally digging the pink and green combo, I've been wearing a lot of that lately, especially since I got these shoes! 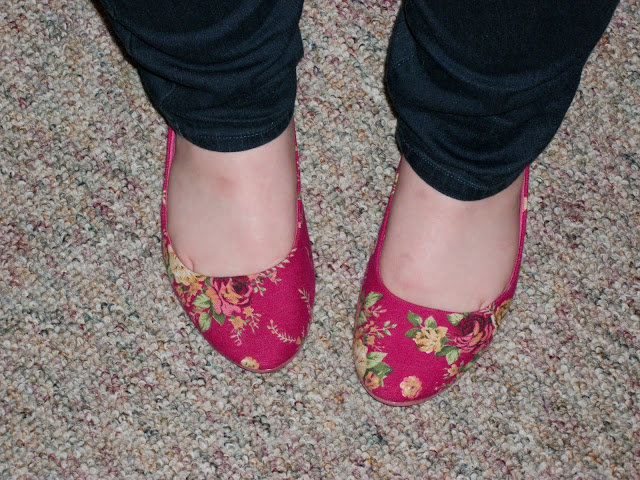 I hated working at Marshalls but I love shopping there!  They were 20 bucks and super cute. 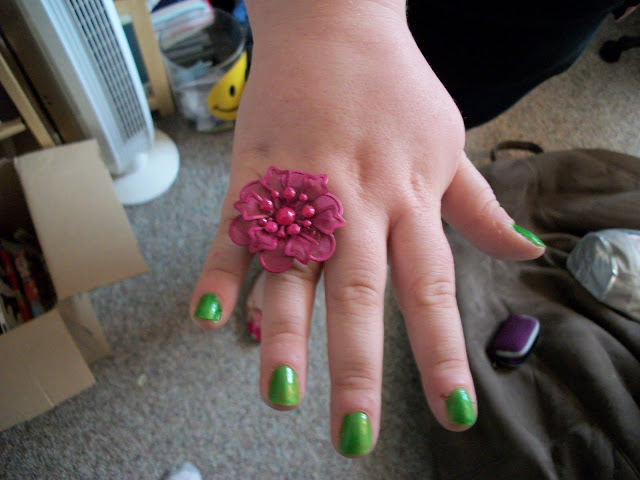 I like the idea of stretch rings because my fingers are pretty big so it is really hard to find rings that fit.  The problem is that they still seem to have a "standard" size, so I find my finger gets really itchy and annoyed after a while and I end up having to take it off, or rotate fingers throughout the day.  Would it kill them to make it just a little bit looser?  I did get one from Avenue last week that is a little better.   Maybe I'll show it off in my next OOTD.  Also, I recently found out that the Forever 21 near where I live has Forever21+  stuff in the store, so I'll have to show you some of my finds there as well!
Have a great weekend everyone!
~Mrs. Sprat
Posted by Mrs. Sprat at 6:07 AM 1 comment:

Hello everyone!  I am done with my semester and back in action!

I was working at ON last week and a customer had a two piece set for an infant boy (I think the size tag said 3-6 months on it.)  On the front of the shirt it said "Professional Athlete."  Okay, that's kind of cute, I'm sure they don't make a girls one like that but I am sadly used to the separate sections of pink and blue throughout the store.  But when I flipped the outfit over to fold it, the back said "I only date models."

What's wrong with this picture?

First, we have the boy being an athlete.  As if it is the only thing that boys are good for.  What is the stereotype that we hear when a man finds out he's going to have a son?  Oh good, now I'll have someone to play ball with.  His girl children certainly can't do that, nor his wife or coworkers or anything.  The entire biological reason for having  a boy is to have someone to throw a ball around with.

Then, we have the "I only date models."  Do I really have to say how offensive that sentence is, even as a joke on an infants t-shirt?

Third, we have the conflation of the two.  What is the message here?  I am an athlete, so I am a fit man.  Because I am a fit man, I deserve a fit woman, who is a model.  Remember: Thin women are healthy and muscular men are healthy.  So they are each other's equals.  The really sad truth is that saying he is an athlete really tells us nothing about what he looks like.  There are plenty of fat athletes, and plenty of unattractive ones, but saying that he only dates models, we know exactly what she would look like.  It is the same old story, a man has to have a good job, and a woman has to look good.   I think that if the shirt just said "I only date models" I wouldn't have even minded so much, but the conflation of the two is what makes me so mad.

I understand that the infant doesn't understand what he's wearing, but do parents really want to make that message to others about their child?  "My kid is going to keep everything the same as it is now."  Shouldn't you want your children to change the status quo?  Shouldn't you as a mother or a father want something better for your child than what you had?  Or am I just overreacting to a cute shirt that parents buy their kids?

Here are a few pics from my trip to Ithaca!  Enjoy! 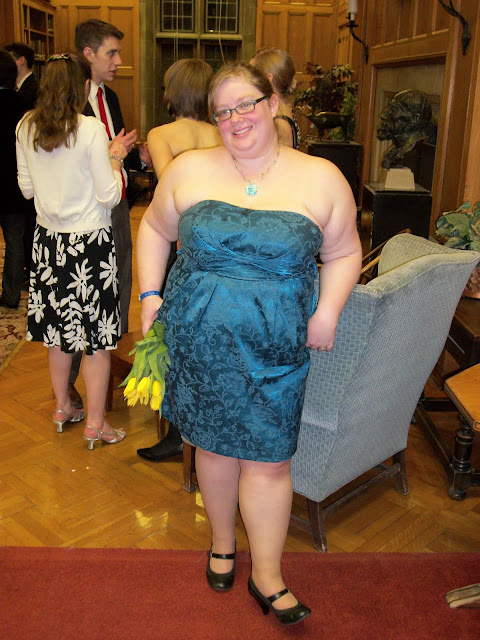 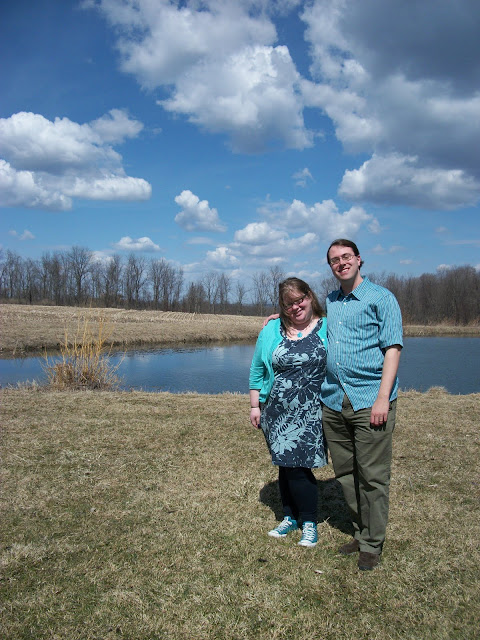 In wine country with Mr. Sprat.  The dress is Kohls, but it's straight sized :(  I think they sell it in plus on the website though.  We got really lucky, the weather was gorgeous the second day, which is unusual for Ithaca in  April, usually it snows! 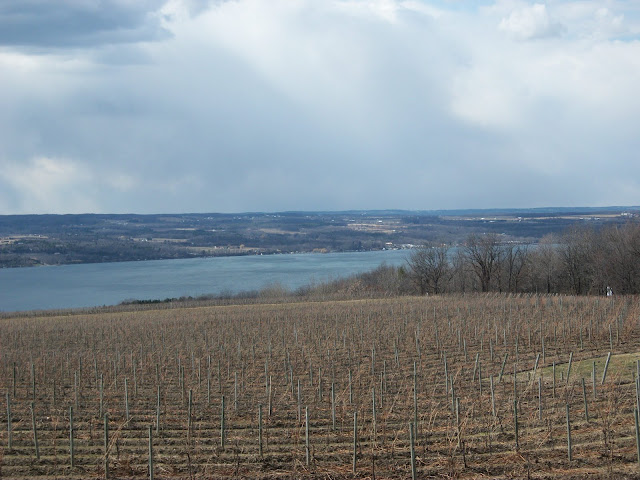 Have a great weekend, everyone!
Love,
Mrs. Sprat
Posted by Mrs. Sprat at 2:37 PM 1 comment:

Hello all!  I am down to two papers and two finals and still plugging along.  But the good news is that I will most likely have all of May, June, July and August off from school so expect a TON of blogging then.  For now I'll will give you a short round-up.

FatHeffalump continues to inspire me with this post.  If you have come here accidentally or still feel unsure of what FA is all about please read!

Brian at RedNo.3 has started (or restarted) a hashtag on Twitter called #thingsfatpeoplearetold.  If you are a tweeter, go check it out.  If not, check out his blog.  It is both extremely sad (or anger-provoking) and beautiful at the same time.  It is amazing how many people have shared these experiences.  It's such a relief not to suffer in silence anymore.

Over the weekend I went to NYC  to see BroFats (my brother) perform in a Jazz Combos concert.  While I was there I had breakfast at Friendly's.  You who else was there?  The calories from every dish on the menu.  I hadn't seen any of those menus yet and I have to say that even though I was never a huge calorie counter, it was a little triggering for me.  I kept thinking, why should I waste this many calories on breakfast if I don't even like breakfast that much?  And then I reminded myself that calories are an invention and if I eat until I'm full and then stop, I'll be okay.  It was harder than I thought.

Finally, I am wondering how much the world would be benefited by schools teaching better communication in their classes.  For one of my many papers, I am dealing with teaching the different communication styles:  assertive, aggressive, passive and passive-agressive, and how to become more assertive.  One of the ways to be more assertive is to use "I" statements.  I think diet talk would be far more tolerable if people used "I" statements.  For example, when I was visiting my brother he mentioned that he doesn't eat much meat anymore.  "You'd be surprised at how much better you feel."  I responded by telling him I was uncomfortable talking about it (I am not "out" about FA to my family).  If he had said "I was surprised at how much better I felt" then I could have said "well I feel much better when I do eat meat."  And we might have been able to leave it at that.  Your experience is not everyone else's.  Likewise, I am sure that someone (the media, a friend, etc) told him that he would feel better, so he thinks he does because someone else said "you" instead of "I."  What other ways do you think "I" statements can be helpful in FA?

That's all for now!  Maybe on Friday some pics of the Grad Ball and my trip upstate!

This blog is meant to be a safe space for people of all shapes and sizes to discuss various issues. No diet talk will be tolerated. There are PLENTY of forums out there for people who are dieting, please take those comments there. Anything ageist, sexist, sizeist, ableist, racist or any other ist will be deleted.
Trolling is subject to mockery by myself and other readers. Comments can help learning and understanding, please keep that in mind and be respectful of others.

Notes from the Fatosphere